Why Afghanistan reminded us of Kosovo 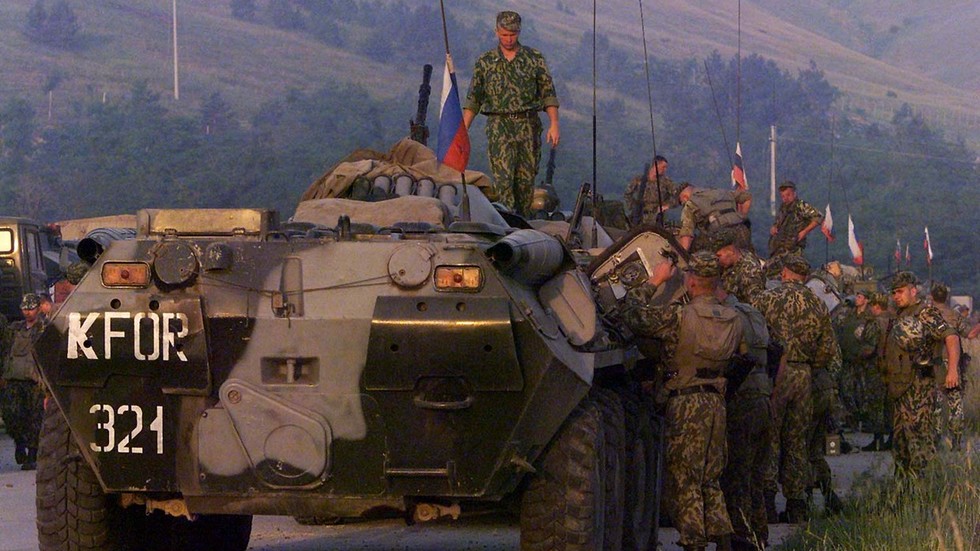 Recently, the Sputnik agency reported that the United States Army “sneaked” from the Bagram Air Base, and that the withdrawal was discovered after two hours. It is obvious that the Russian media knows how to increase the readership with sensationalist headlines, since they did not mention that the US withdrawal from Afghanistan was already announced a whole decade ago, especially during the pre-election promises. Finally, although being a policy consideration for a long time only on the 29th of February 2020, the then President of the USA, Trump, signed an agreement on the withdrawal of allied troops from Afghanistan, in Doha, the capital of Qatar, according to which the withdrawal deadline was to be in mid-2021. After 20 years of conflict in Afghanistan and the loss of 2,448 US soldiers, the plan became operational. Hardly anyone can be satisfied with the way the withdrawal plan went, but the public will only be informed about the elements of all the events that followed the signing of the agreement and its implementation, given that controversial mistakes were made. What goals the United States has achieved with its allies and what is the perspective of that region, remains a question for analysts who follow the events in that part of the world. Unfortunately, the tragic consequences of Russia’s ten-year engagement in Afghanistan, with 15,000 Russian soldiers dead, are being studied today by only a few historians.

The public in Serbia, and especially the executive branch, is more focused on the security of our region, and that is why it highly appreciates the contribution of the NATO mission KFOR in ensuring peace and stability in the southern Serbian province of Kosovo. The KFOR mission currently has over 3,800 soldiers from 28 countries, but unfortunately, Russia is not among them, since it “escaped” from Kosovo and Metohija (“Kosovo”) and Bosnia and Herzegovina in 2003, leaving behind their “brothers” without explanation, but also without protection. The euphoria of Kosovo Serbs over the arrival of Russian troops was soon replaced by disappointment and disbelief following President Putin’s 2003 decision to withdraw Russian peacekeepers from former Yugoslavia.

From this distance, it can be explicitly established that the operation to capture the “Slatina” airport on 12th of June 1999, was only a tool in positioning Russia in the negotiations on the division of the sector and participation in the KFOR mission. The backdrop of the pompous operation followed the fact that allegedly no country allowed the overflight of Russian planes with logistical and military support, although Russia had the capacity to supply its troops by sea, which they did not intended to do. After only six days, and the adoption of the Agreement between the ministers of Defense of the USA and Russia from Helsinki, Moscow gave up the requirement to have its zone of responsibility and reduced the allegedly desired participation of 10,000 soldiers to a maximum of 3,616 Russian peacekeepers. The public is also aware that the Russian soldiers then experienced a blockade of deployment in Orahovac, which was a clear indicator of the impossibility of projecting influence on the ground. At that time, it was already clear that the mission was ending its purpose and that it was time for a gradual withdrawal. However, for the Serbian people, even the symbolic participation of Russia in the KFOR mission was extremely important, especially on the locations of their deployment (Srbica, Malisevo, Kosovska Kamenica and Pristina airport). From this time distance, we can come to a certain conclusion that the Russian presence in Kosovo could have prevented the March 2004 pogrom.

Although some Moscow-friendly analysts are trying to justify the reasons for the withdrawal of the Russian contingent on reduced operational responsibility, or cite demanding financial resources and the impossibility of logistical supply, the real reasons lie in Russia’s geostrategic interests in which Serbia did not fit. The fact is that the representatives of the authorities from Moscow have never officially announced why they left Kosovo. It is true that some savings were made by withdrawing its contingent. According to the data presented in the Russian Duma, that is about 20 million dollars a year by withdrawing the contingent from Bosnia and Herzegovina, and about 69 million dollars and 60 million rubles a year by withdrawing from Kosovo. However, those amounts seem minimal in relation to the two billion dollars that the Kremlin spent in 2003 to mark the 300th anniversary of the foundation of St. Petersburg.

Savings have always been an unknown issue to the Kremlin, especially in the context of geopolitical positioning. Although today Russia has a Gross Domestic Product (GDP) lesser than six NATO countries, and even California, Texas or New York individually, it still has a very large military budget, which is officially planned for next year to be 51.3 billion dollars, which equals 2.6% of GDP, which includes all procurement, research and development costs paid in rubles.

The real reason behind Putin’s decision to withdraw the Russian contingent from the former Yugoslavia was Moscow’s intention to build a strategic partnership with Washington D.C. At that time, Moscow provided strong support to the United States and NATO, which Putin emphasized in his speech in 2002, when he noted that the partnership with the United States is of the greatest importance for Russia, and that countering terrorism is one of the key elements of Russia’s foreign policy. This was evident when bilateral military cooperation between Moscow and Washington D.C. was seriously improved through the exchange of intelligence, support in equipment and weapons, approval of the use of Russian airspace, as well as coordination with Central Asian countries where US air bases were established. Unfortunately, Moscow’s geostrategic interest outweighed the importance and role of Serbian interests in Kosovo, so it was clear that Russia did not want to compromise the prospect of improving relations with the United States and NATO in exchange for the protection of Serbs.

The curiosity is that many countries participate in the KFOR mission with exclusively altruistic motives, without calculated geopolitical interests in the region. Unlike Russia, for example, Ukraine has participated in the KFOR mission since its establishment and has contributed to the survival of Serbs, especially in the municipality of Štrpce where they were deployed. Today, with an engineering unit, they perform demining activities and engineering support to local authorities. Thus, in the town of Lešak, they prevented the destruction of the bridge over the river Ibar, for which the mayor of the municipality of Leposavić thanked them. Instead of showing respect to Kiev, in Serbia you may often witness anti-Ukrainian lies in the media that do not correspond to the official foreign policy positions of Belgrade.

In addition, there may be reasonable suspicion that Moscow is diplomatically blackmailing Belgrade with its support in the UN Security Council regarding the Kosovo issue. This is especially noticeable in cases of deviation from harmonization with the Common Foreign and Security Policy of the EU, although a social consensus has been reached on European integration as a foreign policy strategic goal. The latest such case is Belgrade’s decision to send an ambassador to Damascus, which explicitly recognizes Bashar al-Assad’s democratic legitimacy as president, despite the completely opposite stance of Brussels.

It is quite easy to prove the continuity of Russian interests in the Balkans, which were often incompatible with Serbian ones. During the 1990s, they traded influence in Belgrade with the aim of geopolitically positioning themselves as a credible partner to the West, and at the same time, through the military supplier Zvonko Zubak, they armed Croatia despite the UN embargo. The continuity of their foreign policy in the Balkans is clearly seen in the publicly available statements of the Russian ambassadors in Zagreb, who strictly carried out the orders from Kremlin. The current Russian ambassador to Zagreb immediately upon his arrival in Croatia paid homage to the remains of Franjo Tudjman, which in diplomacy is a gesture that sends a clear message – to both Belgrade and Zagreb.

However, Serbia should not blame the Kremlin for promoting its own values and defending national interests in the region. The long-lasting levitation between the interests of the great powers has caused oblivion and ignorance of one’s own national interests, which has gradually led to the decadence of society and the hopelessness of young people. In such an environment, it is quite logical to be seduced by intoxication with nationalism and populism, which do not award us with a sustainable future or the establishment of a modern national interest. The Russian Federation is just one of the great and mighty powers that, unencumbered by emotions, effectively protects its interests and profits from regional conflicts by selling the most sacred thing – love. Time ago, in an episode of emotional disappointment concerning the imperialist policy of Russia in the Balkans, our Jova Jovanović Zmaj wrote an inspiring poem on  Russian diplomacy in which he emphasizes: “Thank you, thank you, Serbian mother that you are not! Blessed is he who puts his hopes in you”. Today, we are indebted to Jova by placing the Russian Center in the Novi Sad high school that bears his name, on the initiative of the “Russian World” Fund, whose main task is to project the soft power of the Russian Federation abroad. As with all kinds of love, one should not cultivate expectations in order to avoid disappointments.

This website uses cookies to improve your experience while you navigate through the website. Out of these, the cookies that are categorized as necessary are stored on your browser as they are essential for the working of basic functionalities of the website. We also use third-party cookies that help us analyze and understand how you use this website. These cookies will be stored in your browser only with your consent. You also have the option to opt-out of these cookies. But opting out of some of these cookies may affect your browsing experience.
Necessary Always Enabled

Any cookies that may not be particularly necessary for the website to function and is used specifically to collect user personal data via analytics, ads, other embedded contents are termed as non-necessary cookies. It is mandatory to procure user consent prior to running these cookies on your website.