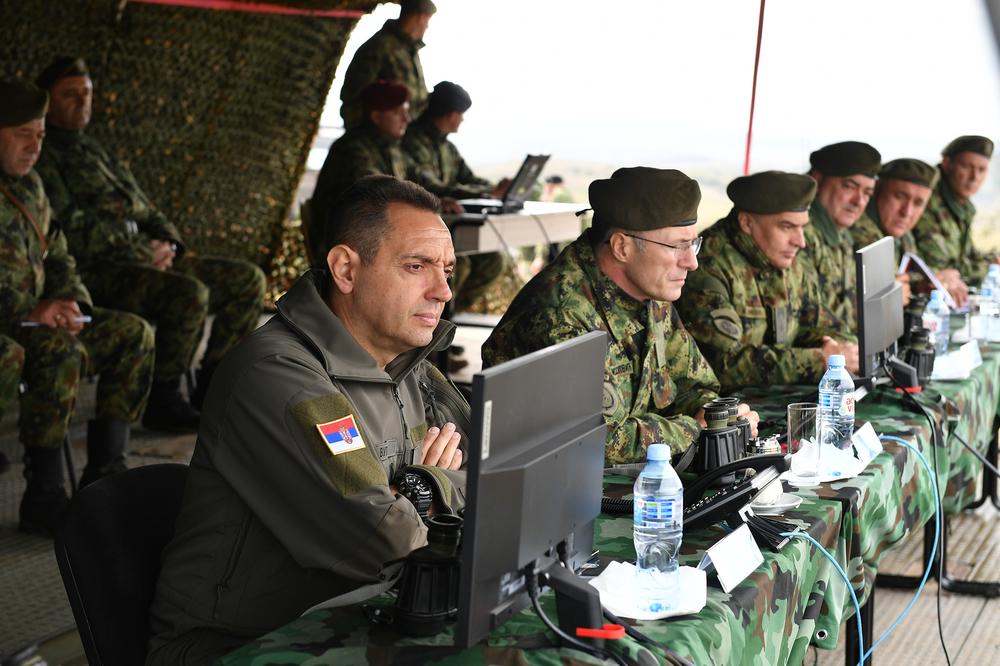 The Decision of the Government of Serbia from September 9 to stop all military exercises and all military activities with all partners in the next six months seems to have lasted for a total of 85 days.

“It seems” should be emphasized because the adopted Conclusion revoking the Decision to suspend the participation of the Serbian Armed Forces in exercises with foreign partners from December 3 this year is still not published nor is the public informed in any way. The earlier Decision on the proposal of the former Minister of Defense was obviously wrong. Although it is always necessary to retain the right to criticize state bodies, praises should not be avoided, too. That is why the initiative of the Minister of Defense Stefanović to cancel such an absurd decision should be clearly welcomed.

Unfortunately, the explanation of the Decision on the planned six-month moratorium on military cooperation was then left to Vulin, who, with his non-diplomatic rhetoric, only exposed views of his belligerent left wing movement. Instead of contributing to Serbia’s European integration through his engagement as Minister of Defense, which is perhaps only generally accepted goal in our society, he then accused the EU of exerting “terrible and undeserved” pressure on Serbia. In the manner of 90’s narratives, he did not forget to mention the “pressure” on our people in Kosovo and Metohija and in the Republika Srpska. It was even unclear why Vulin included in his consideration the suspension of our participation in multinational operations, which would definitely be against the state interest. Later events in Minsk confirmed the correctness of the decision to cancel the participation in the military exercise “Slavic Brotherhood 2020” in Belarus, but not the decision on the self-isolation of military cooperation, especially in the region.

In the foreign policy context, the importance of defense policy must never be underestimated. Vulin knew that, and he used his department in an efficient way to, before all with his rhetoric, disrupt the already sufficiently burdened regional relations. At the time when we defined the role of KFOR in protecting our people, cultural and religious heritage, as a national interest, Vulin appealed to Podgorica not to send its soldiers to Kosovo and Metohija. The chaotic reality of the conflict between national and party politics has shown us that even when we declaratively do not recognize Crimea as an integral part of the Russian Federation, some ministers have managed to annul it. Instead of, for example, sending to Kiev official condolences on the tragedy in Crimea and the massacre at the college in Kerch, which would be in accordance with our foreign policy, Vulin sent it to Moscow anyway. At the same time, the Minister of Foreign Affairs did not have time to correct such actions because they were probably “trivial protocol” things for him.

Let there be no dilemma; far greater damage to society is generated by the wrong defense policy and the creation of security distrust in the region than by non-transparent and dubious deals with weapons and military equipment sales. The consequent promotion of the tabloidization of the strengthening of military capabilities has two consequences – a sense of apparent security in the part of the population that spills over into a political rating and a feeling of distrust in the region that makes declared military neutrality meaningless.

Judging by all indicators of defining national interests and building strategically reliable relations with the West should be our foreign policy goal. Because the future of the nation should have priority over the past, values ​​over emotions, economic cooperation over the imagination of trade and, finally, the optimism of younger generations over the burdens of the older ones. Therefore, ministers who formally accept European integration, but whose activities clearly flirt with the values ​​of Eurasian countries, have no place in the Government of Serbia. The worst thing is that Vulin is not alone in such attempts. And precisely because of this kind of attitude, Serbia is in a situation without a visible shift towards the EU.

The Ministry of Foreign Affairs showed us, on the example of the death of our diplomats in Libya, that crisis management is not their strong point. Unfortunately, they cannot boast of the transparency of information important to the public and consistency of foreign policy. Despite timely warnings from the security structures, Minister Dačić claimed at the time that Serbia had a foreign policy, state and national interest in the further work of the diplomatic mission in Tripoli. He did not declare personal interests, although Vučić himself hinted that one of the possible motives for the kidnapping of diplomats was the arms deal. Piety towards the dead diplomats and responsibility towards the public make us seek the truth even today. And of course, the responsibility.

The Government’s decision to withdraw the ambassador from Paris and the three-month suspension of official visits to France due to the decision of the Court of Appeals in Colmar to reject Serbia’s request for the extradition of R. Haradinaj should also be recalled. After only 15 days, Dačić sent the ambassador back to Paris for a reception organized by the mayor of Paris. The line minister also showed us his negotiating talent when, after a meeting with Dr. Thomas Zarzecki, he stated that there would be no US sanctions. Sanctions were soon imposed, albeit with minimal consequences regarding the state interests.

During the recent vote on the UN General Assembly resolution calling on Moscow to withdraw its military forces from Crimea, Serbia chose ​​and sided with countries such as North Korea, Iran, Syria, Belarus, Cuba and Venezuela. Although diplomacy itself provides the possibility of not attending the sessions so as to avoid voting, we have chosen to explicitly oppose it. Serbia thus chose anti-European values, and Minister Vulin translated it into a foreign policy stance, stating that Serbia would always vote and be with its friends Russia and China. It is paradoxical to pursue a policy where we recognize Ukraine within its constitutional borders, and in practice we obviously recognize the occupation of part of its territory. That is why the public should not blame the EU for not opening new chapters, because there is no commitment of the political elite to European integration and the intention to harmonize foreign policy with the Common Foreign and Security Policy of the EU.

Serbia’s foreign policy, with its institutional mechanism of power that protects itself from changes of all kinds, is irresistibly reminiscent of the script of the comedy “Yes, Minister”, which unfortunately still represents a tragedy in terms of genre in our conditions. And Dačić himself could best be personified with the character of Sir Humphrey Appleby – eternal function and lasting interests, but only personal.

Serbia’s foreign policy has been for too long reduced exclusively to the rhetoric of the ruling party and the levitation between the interests of the great powers. However, the geostrategic situation in the world does not allow the leaders of our country to try to copy Tito’s vision of non-alignment and flirt with all global players in the modern constellations of relations. The seductive intoxication with nationalism and populism neither help foreign policy positioning nor the projection of influence, even if they are of limited scope. Foreign policy should be freed from the party influence of any ideological option as soon as possible, and instead of serving to measure political rating, it should serve to promote good-neighborliness and evaluate the work of ruling establishment. That is why we need a Foreign Policy Strategy; to build the future, not to be trapped in the past; to invest in young people, not to cure complexes of unfulfilled territorial ambitions. And, finally, we need it for politicians of all profiles to serve Serbia, and not make Serbia serve them.

Previous [EXCLUSIVELY] Chief of the NATO MLO for cfsp.rs: The public does not see how much NATO and Serbia work together
Next Pogledi: Šibicarenje spoljnom politikom