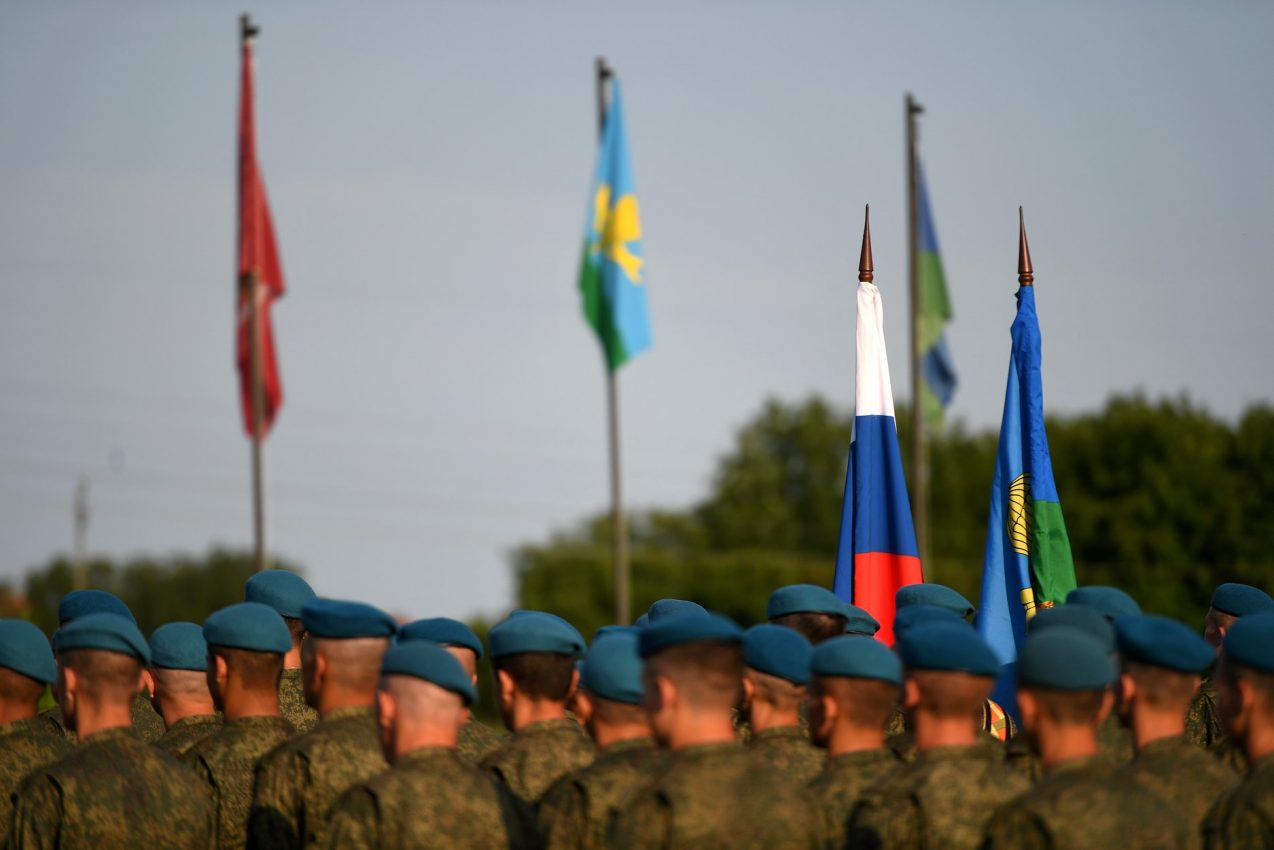 Tomorrow, the Belarusian-Russian military exercise “Slavic Brotherhood 2020”, taking place in Belarus at the “Brestski” range this year, officially ends, but without the participation of the Serbian Armed Forces (SAF) members. This in a way interrupts the continuity of the trilateral exercise, which has been taking place alternately in the participating countries since 2015. A decision to cancel the participation in Belarus proved to be the correct one as is also shown by the subsequent sequence of events and the recent announcement of Lukashenko’s partial mobilization and complete closure of the border with Poland and Lithuania and its strengthening with Ukraine. The instability in that country is further complicated by the adoption of the resolution of the European Parliament, which states that the opposition Coordination Council represents the temporary representative of people. Meanwhile, in the style of modernized agitprop, Lukashenko shifts the internal problem of the rule of law to the foreign policy context and lurking danger from aggressive hostility coming from neighboring countries.

Although correct in the context of the mentioned exercise, this decision of the Government, which was euphorically interpreted by Vulin in the spirit of his characteristic narrative of belligerent left wing, on the terrible and undeserved pressure of the EU to condition our European future, resulted in the cancellation of all other military exercises in the following six months. The culmination of the dramaturgy in his personal interpretation of the Government’s decision was the pressure of the EU, probably regarding the survival of our people in Kosovo and Metohija and the Republic Srpska, because of which we “knelt down” and canceled our participation in Belarus. At the same time, we did not hear a word about the current situation in that country, nor about our support for the EU Declaration on the presidential elections in Belarus, which explicitly states that those elections were neither free nor fair.

The EU High Representative for Foreign Affairs and Security Policy Joseph Borrell presented his comment in a diplomatic manner, emphasizing that Serbia was expected to act in accordance with its strategic goal, and to fulfill its undertaken obligations within the framework of accession to the Union. However, not all powerful countries look favorably on the increasingly obvious harmonization of our policies with the EU’s Common Foreign and Security Policy which is especially difficult for domicile marionette of third countries who position themselves in Serbia as sinless instructors of national interests and supervisors for traitors of all kinds.

If the public is asked whether this shows an inconsistency of foreign policy, the answer is very simple – the foreign policy of the Republic of Serbia does not exist. It has long been reduced only to political elite rhetoric and the consecutive rating that some decisions might produce. In such a tumultuous interpretation of foreign policy identity, it is very easy to manipulate with national interests which are one of the most important concepts in the realistic theory of international relations. Thus, even the current Minister of Foreign Affairs referred to national interests when it was necessary to explain why the Serbian Embassy in Tripoli remained open despite warnings from the Security Information Agency.

It is incomprehensible that all political parties in Belgrade take over the legacy of indefiniteness, first of all of the State Strategy which should define national values, then national interests and goals and then the Foreign Policy Strategy which would enable evaluation of the work of the current establishment and prevent verbal media outbursts of political hawks that only do damage in the context of foreign policy. But the fact is that we have gained the international perception as an unreliable partner for decades, and now we can enjoy the diligent work of a plethora of politicians. The conditional approach of the Minister of Foreign Affairs towards the obligations from signed agreement in Washington, relating the opening of the embassy in Jerusalem, seems ridiculous in itself. But in the context of international politics and a regional approach, that is far from being humorous.

The essence of the policy of liberal-democratic systems will definitely remain unchanged, and the basis for them will continue to be already defined social values, and not changing variables that change every day. Otherwise, the conflict of ethics and rhetorical virtual national interests could have irreparable consequences for the future of the entire nation.

In order to correctly assess the six-month moratorium on military exercises and our participation in multinational operations (MNOp), which will be “specifically considered and suspended if necessary”, it should be borne in mind that each country builds part of its credibility and foreign policy influence on the engagement of its armed forces in peacekeeping missions. Therefore, the second mission of the Serbian Armed Forces, i.e., participation in building and preserving peace in the region and the world, is an unavoidable element of the foreign policy of the Republic of Serbia. By engaging in such a way, we expand our foreign policy influence, but at the same time we improve our operational capabilities and strengthen interoperability, which can significantly reduce the costs of joint operations through complementarity and compliance.

For each MNOp, there should be a detailed inter-ministerial analysis of the risks and benefits that we as a country receive from possible participation in a certain mission, and especially the analysis of bilateral arrangements of participation in joint contingents. The absence of such analyzes generates often unrealistic offers such as our significant participation in Afghanistan or the engagement of our units in Syria. In addition to the undoubted benefits, it is necessary to assess all risks regarding both security and foreign policy. It is essential that we optimally capitalize on our participation in the MNOp in the foreign policy context, and that we accept all the risks of such engagements. In principle, participation in the MNOp should serve as a bilateral and multilateral tool for spreading influence among partners so that we do not end up wondering whether some votes in international organizations will be favorable for Serbia’s interests or not.

It remains unclear from Vulin’s statement why the decision to cancel military exercises also applies to the EU, considering that by adopting the Conclusion on the Accession to the EU Battlegroups Concept and expressing the intention to participate in the HELBROC battlegroup, we practically included the country in the EU coalition forces. In addition, we have been actively participating in several EU peacekeeping missions for a long time, all in accordance with the generally accepted consensus on the strategic priority of European integration. That was the reason for signing important agreements with the EU in this area – the Agreement on Security Procedures for exchanging and protecting classified information and the Agreement establishing a framework for participation of the Republic of Serbia in European Union crisis management operations.

Due to all said above, the interest of the Serbian Armed Forces and its members is explicit – the more exercises and the MNOp, the higher the level of training, interoperability, motivation of the SAF staff and understanding of partners. However, the Republic of Serbia is a country of limited resources that should be used in an optimal and efficient way, and its engagement in the security context should be graded according to national priorities. Therefore, it would be logical for the Minister of Foreign Affairs to explain the Government’s decision to cancel military exercises and use it to re-emphasize the importance of the European integration process as Serbia’s foreign policy priority in which we are obliged to harmonize national policies with the EU Common Foreign and Security Policy. Unfortunately, our politicians primarily adapt their verbal narrative to the expectations of their voters, sometimes to their own positioning, and least of all to national interests. Precisely because of this, the Ministry of Foreign Affairs continues to maintain its inviolable position of Ministries of Sinecure; without responsibilities, but with many privileges.

Should we emphasize to the Minister of Defense that military neutrality will not be preserved by any decisions of the Government on the cessation of all military exercises and activities with all partners, nor will strategic documents in the field of security that try to levitate between the interests of great powers contribute to that. The proclaimed military neutrality in Serbia will be sustainable at the moment when we impose trust in the region as a system of values, primarily in the security context. And the tabloid armour race and the rhetoric of the 90’s à la Vulin certainly do not contribute to that. But a strategic vision of Serbia would contribute and would make possible with reliable partners and sincere allies to achieve its national goals appropriate to the global geopolitical context and ensure secure future for young people. It is because, as Churchill said, there is only one worse thing than war with the allies, and that is war without them.