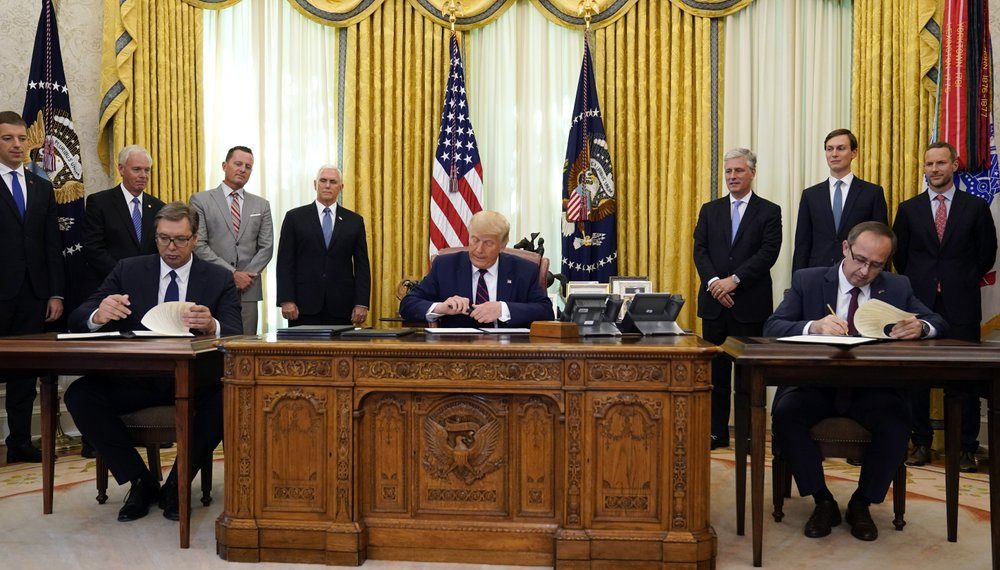 Dragan Šutanovac, President of the Council for Strategic Policy

At dawn of the dialogue continuation between Belgrade and Pristina.

The victory of the democratic candidate at presidential election might probably contribute to harmonization of joint performance of the USA and the EU, but it could further entangle the already difficult negotiating position of Belgrade. A standstill of the Serbia’s EU membership talks also complicates its position.

Now, it is certain that the dialogue between Belgrade and Pristina will officially continue at the beginning of September in Washington and even the presence of President Trump is announced, which takes this event to a much higher level. After the cancellation of June 27 meeting, the White House administration will certainly do everything to prevent another cancellation, regardless of the reasons and wishes of certain centers of power.

What many rightly ask is whether the announced dialogue has been coordinated between the United States and the European Union, and what is the scope of this negotiation round.

RETURN TO THE ELECTION RACE: Having been stunned in the pre-election period by the unforeseeable consequences of the pandemic, as well as the conflicts across the United States after the brutal murder of Afro-American George Floyd, Trump is making moves which takes him back to the election game, primarily to the international field.

Given the recent signing of the Agreement on the Normalization of Relations between Israel and the United Arab Emirates (UAE), which is an indisputable merit of Trump administration, but also a visionary move by the leaders of the two countries, it is obvious that Washington is in specific foreign policy offensive. With this Agreement, the UAE becomes the third Arab country officially being at peace with Israel and it can be expected that other Gulf countries will follow this example.

In spite of that, we should not expect that the Agreement will contribute to the final normalization of relations for Israel, but it is a great start which will certainly help Trump in the upcoming election campaign.

Although the next presidential election will be marked by the American concern about the direct and indirect consequences of corona virus pandemic , at this moment Trump cannot afford to undermine the US influence in the foreign policy context. Therefore, many initiatives in foreign policy can be seen as an attempt to compensate for the straggle in the rating behind the Democratic Party candidate.

On the other hand, the example of successful mediation in finding a lasting solution for Athens and Skopje shows that Trump is prone to unconventional and pragmatic solutions because with the experience of a businessman he wants to solve problems quickly and efficiently, and that is probably the only advantage he has at the traditional political scene in the US.

GRENELL AND LAJCAK: The agility and adaptability of the current administration in Washington put Serbia in a geopolitically ungrateful position since the EU is obviously not ready to support Trump in any initiative that would give him an advantage before the presidential election. Truth be told, even Trump did not show much understanding for the problems the EU was facing during his mandate, so the time to pay has come. It is now clear that the practicality and efficiency of Richard Grenell, the US Special Envoy for the Kosovo-Serbia Dialogue, largely freezes the efforts of Miroslav Lajcak, the EU Special Representative, which many EU leaders are reluctant to allow at the moment, especially Chancellor Angela Merkel.

Using this kind of measuring geopolitical influence can cause Belgrade, and probably Pristina, to pay the highest price, which has already become practice.

The declared goal of the Belgrade-Pristina dialogue is to sign a comprehensive, final and legally binding agreement on the normalization of relations, and it is largely complementary to the interests of both the US and the EU, but in the context of projection of mediators’ geopolitical influence, it is very competitive.

The victory of democratic candidate in the presidential election would probably contribute to harmonization of joint performance of the USA and the EU, but it could additionally complicate the already difficult negotiating position of Belgrade.

The standstill in the talks on Serbia’s EU membership also complicates its position. This can be explained by the non-fulfillment of obligations under Chapters 23 (Justice and Fundamental Rights) and 24 (Justice, Freedom and Security), but also by the fact that the EU is not overly satisfied with their impression that the Serbian officials would reach an agreement with Pristina much easier with the current White House administration. Here we come to new problems facing Serbia, such as judicial reform, change of the Constitution…

Regarding the assessment of the results of the upcoming meeting, one should be very restrained, but it is realistic to expect a broader discussion on many topics, with a focus on economy. During a recent visit to Washington and informal meetings, both with the US officials and members of the think-tank institute, I got the impression that checking of “diplomatic pulse” of two sides for a possible political agreement in future is underway.

At this point, any agreement outside the economic context would be unrealistically ambitious, and on the other hand, it would be a pressing need primarily to make life easier for the people of Kosovo and to relax the strained relations spilling over into the region. Everyone understands that there is no quick solution and that the same dynamics in the political dialogue is not possible, but it is important that the process started with only one doubt regarding the order in which both sides will swallow frogs.

But one thing is for sure – whatever is agreed on at the beginning of September it will be presented in the media in Pristina, Belgrade and Washington as a progress, but if the US President personally attends the agreement, then the agreement will obtain an epic significance, at least until the first week of November.

THE INFLUENCE OF MOSCOW: On the other hand, in the analysis, it should not be omitted to mention the influence of Moscow, i.e., the “third fire”, as a permanent member of the Security Council. Their interest has been repeated several times and it is clear to everyone that a quick solution to the Kosovo issue does not suit them, and the question is whether the current situation is the best solution for their own interests. The evolution of the Russian position is also noticeable, starting from the acceptance of every agreement between Belgrade and Pristina, which is represented by Minister Lavrov, up to the fact that the agreement is out of the question if Moscow does not approve it, as the Ambassador Kharchenko told us via Serbian press.

This only speaks in favor of thesis that, unfortunately, we are subjected to a conflict of influence of powerful countries that will certainly trade regional strategic interests, without involving any of their own stakes. It is already clear that the geopolitical positioning in the region and the “clash” of interest among the centers of power will definitely be conducted in Belgrade, but it will also largely depend on the results of parliamentary election in Montenegro.

There comes a time when you need to keep in mind that it is no longer enough to know what we are not going to do. At this moment, it is necessary to know what goals we have and what is achievable and what is not. Also, it is useful to assess whether the stand-by arrangement is profitable for us in some respects, or whether it is counterproductive. However, the most important thing is to have a dialogue with cost benefit analysis and realistic assessment of the consequences for the nation. Nevertheless, to have uncompromising attitudes today means to reject the negotiations themselves, which only irresponsible politicians or world power leaders can afford.

Regardless the excessive number of oaths given to national interests, it should be officially pointed out that it is necessary to implement the security context in some part of political negotiations. However, what is a curiosity and what indicates that the White House is ready to turn the talks into the negotiations, and maybe even agreements, is the fact that the invitation to the meeting was sent by the National Security Adviser to the President of the USA, Robert O’Brien.

It is hard to believe that the national security adviser would exclusively have the economic relations between the two parties as the main topic of conversation, and there are all chances that the talks will also contain some security aspects. We are witnessing an almost certain irreversible process of transformation of the Kosovo Security Force (KSF) into the Kosovo Armed Forces (KAF). International law, and particularly the UN Resolution 1244, gives legitimacy to military presence exclusively to the NATO forces (KFOR) and limited number of the Serbian security forces. However, many countries that recognized Kosovo consider that the formation of Armed Forces is a sovereign right of an independent country, and in line with that view, Pristina has already accredited its defense attachés in Washington, Berlin, Brussels, Paris, London, Ankara, The Hague and Tirana. So, whether I like it or not, this process is going on and as soon as it is openly discussed, it is possible to put it under control in order to raise the level of trust.

Achieving a comprehensive political agreement between Belgrade and Pristina will certainly be a national burden, but the annex on the KAF should not be overlooked. This would include: defining military capabilities in the KAF, limiting the quantity of certain combat systems, defining the maximum KAF strength with the national key and positions reserved for minorities, bilateral or sub-regional, regular and emergency controls, etc. Only a precisely defined agreement relating to security can ensure long-term mutual trust, and indirectly, the sustainability of the implementation of the agreement in all other areas.

This article was published on 27 August, 2020 in the weekly “Novi magazin”.