Soft power and a bear hug 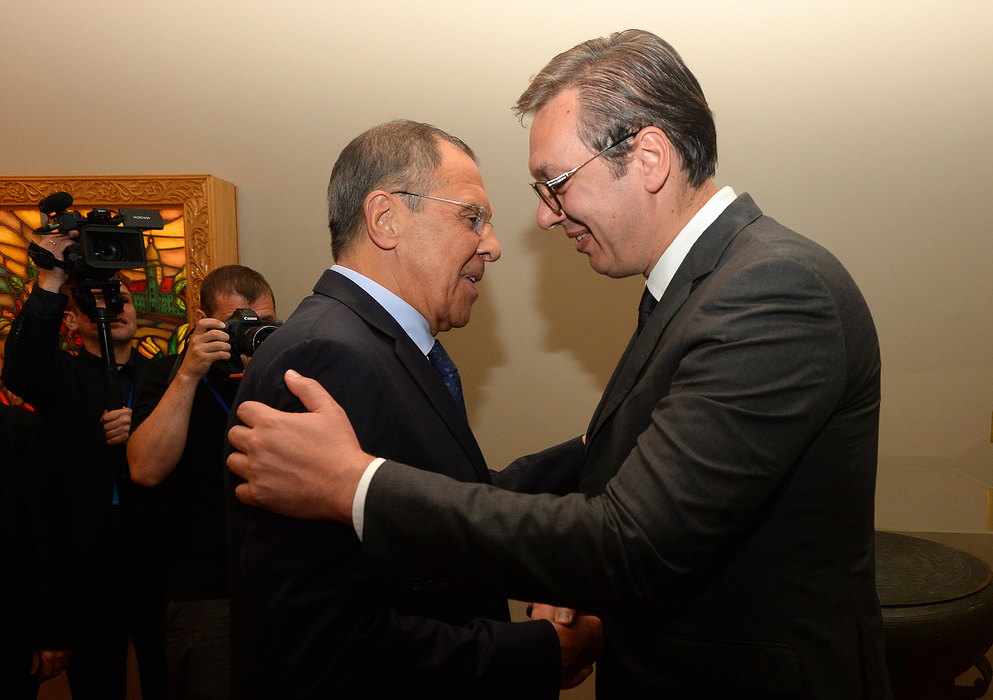 Author: Dragan Šutanovac President of the Council for Strategic Policy

Serbia keeps on preserving its historical role of valuable stakes in the trade between the global powers and cannot, neither assess its importance in the world nor its achievable interests.

This year’s election campaign is, among other things, characterized by the daily media announcements about the arrival of Russian Foreign Minister Sergei Lavrov. There should be no doubt that Dačić coordinated the visit plan very well for his Russian colleague who, miraculously, would stay in Belgrade during the pre-election silence. Namely, the preelection silence will start at midnight on June 18 and the core activities of the visit will be obviously realized on June 19.

Although such a visit is not a pseudo-event that would aim at the official’s appearance in media for no particular reason, the meetings with foreign officials during the election campaign should be viewed in a context of the official campaign in terms of results, or effects on bilateral relations. However, it is already clear that the Minister of Foreign Affairs of Russia is coming exclusively to activate Russophile votes in favor of the bizarre political “elite” just before the elections, and not to approve, for example, the long-announced import of Fiat 500L from Serbia. With his arrival during the pre-election silence, Lavrov would only confirm the stated views of Ambassador Kharchenko, who emphasized in his interview that Moscow had interests in the Balkans and that it “wants what it wants”. Unfortunately for many who are emotionally attached to Russian values, the Kremlin’s wishes are not related to the Serbian ones, but exclusively to the Russian interest, so there is no room for anger.

Putin’s next visit to Belgrade in October has already been announced. The time of the visit was obviously carefully planned in order to influence a possible agreement between Belgrade and Pristina. On that issue, Kharchenko has already emphasized the change in the attitude, which has evolved from the one where Russia accepts every agreement reached by Belgrade with Pristina to the other one in which an agreement is out of the question if Russia, in accordance with its own interests, does not approve it. As the supreme judge, President Putin will consider whether the agreement is in line with Russian interests or not. Of course, with that kind of “consideration”, he would remain committed to the strategic trade with Washington. So, Serbia keeps on preserving its historical role of valuable stakes in the trade between the global powers and cannot, neither assess its own importance in the world nor its own achievable interests. Over time, obviously, it would not be possible to eradicate a delusion about Serbia’s role in the world and its significance for Moscow, because the deficit of young and educated people is becoming a bigger and bigger and more serious national problem while Moscow’s soft power is becoming more aggressive.

One should not be deluded that Russia uses only diplomacy as a means of projecting its own interests in Serbia. In addition to all other hybrid methods, offensive intelligence activities are clearly not losing their intensity. This is due to the significant financial support that we could explicitly see in the case of the affair with Lieutenant Colonel Kleban. The importance of intelligence work can also be seen through the appointment of Major General Alexander Zinchenko as the Defense Attaché in Serbia. After a number of years when the Russian Defense Attaché in Belgrade was of the rank of Colonel, an explicit message is sent to the host by appointing General to this position. As a reminder, the Defense Attaché Office is directly under the jurisdiction of the Russian military intelligence service that is, the famous GRU.

In the analysis of the increased pressure of Russia on Belgrade, the recent appointment of Yevgeny Primakov as a Director of “Russian Cooperation” organization (Rossotrudničestvo) should be also taken into account. Given the history of the relationship between Primakov and Vučić, the appointment of the controversial journalist is generally interpreted as Putin’s increased pressure on the Serbian government. Primakov often spoke in public about the increase of the soft power of Russia simultaneously with the military force, while in Serbia, he advocated the creation of a “grand coalition” in which the Alliance for Serbia would be included. He paraphrased it, explaining that the Russian bear must smile at the world, but so that all its teeth are visible.

Although the “Russian Cooperation” organization is officially engaged in promotion of the Russian positive image, language and the organization of humanitarian aid, there are numerous doubts that this organization is involved in financing demonstrations against the authorities in countries where Russia wants to establish greater influence. The message is more than obvious, and it is not only understood by those who do not follow global and regional trends. For those who are less informed, it is enough to read the texts of members of the Serbian opposition published by the Russian news agency Regnum, in which messages are sent to everyone, both from the government and civil society, who dare to think that the time came to resolve the relationship with Pristina for good.

People generally fight harder for their interests than for their rights. However, when it comes to the national interests, the citizens of Serbia are, as a rule, indifferent. Despite that, “the national interests” phrase is often heard in patriotic narratives, especially during the election campaign. The country’s foreign policy disorientation is exactly a consequence of undefined national interests and nonexisting foreign policy strategy. We are to blame for this kind of negligence because no one has the right to trade us in the global market. And it usually hurts the most when brothers do that – bones can be crushed by their bear hug.

Previous Elections in Croatia: Conservatives retain the parliamentary majority
Next Sa bratom Sijem i do zvezda