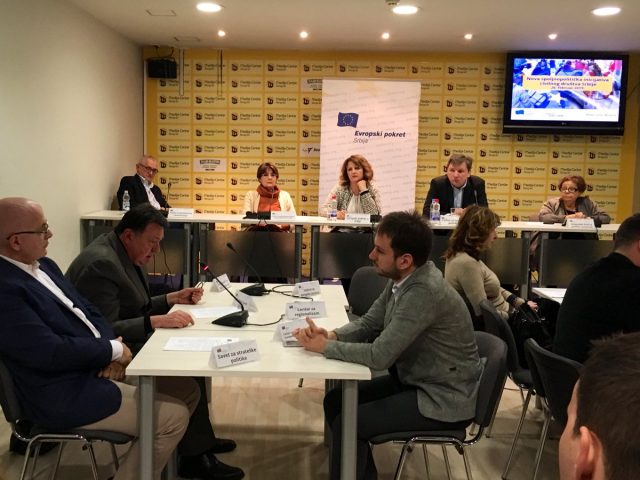 BELGRADE – The process of Serbia’s accession to the European Union cannot progress without ending the normalization of relations between Belgrade and Pristina. It was announced today at the presentation of the New Foreign Policy Initiative, which was adopted on the proposal of the European Movement in Serbia and the Center for Foreign Policy, which was supported by 18 non-governmental organizations.

The reasons for presenting this document are the division of society and the lack of basic consensus on foreign policy decisions, said the Secretary General of the European Movement in Serbia, Suzana Grubjesic.

“The normalization of Belgrade-Pristina relations must be comprehensive and in line with the European perspective of the countries of the region,” Grubjesic said, adding that the unresolved Kosovo problem has captured the entire process of European integration of Serbia, thus focusing on internal reforms, democratization, pluralism, institution-building disabled.

“Regional cooperation and good relations with neighbors are understood not only because of the process of Eurointegration, but also because of the interests of the citizens of Serbia and the region,” Grubješić emphasized, presenting the short-term goals foreseen by the New Foreign Policy Initiative. Emphasizing the importance of regional cooperation, the Secretary General of the European Movement in Serbia called for resolving bilateral disputes with neighbors.

Cooperation and partnership with NATO represent the last foreign policy objective envisaged by this initiative. Grubješić emphasizes that no EU member state in the region has fulfilled its foreign and foreign policy interests without membership in NATO. The new foreign policy initiative proposes the termination of the anti-NATO media campaign, as relations between Serbia and NATO are becoming more intense, as evidenced by the signing of the new IPAP agreement.

“This is not an external policy strategy as a document owned by all countries, but a type of initiative that points to the crucial issues that should be taken in a short period of time so that Serbia can better position itself in the Balkans and in Europe,” said Dragan Djukanovic, foreign policy.

He added that this is extremely difficult at a time when there is no wider consensus on Serbia in which Serbia should move in foreign policy. For each country, strategic decision-making is important, so short-term goals are useful for deepening foreign policy, concluded Djukanovic.

Sonja Liht, in front of the Belgrade Fund for Political Excellence, emphasized that it is essential that civil society organizations have initiated such an initiative, because it is not enough that only the state and party leaders decide on foreign policy. The problem of European skepticism in Serbia, which hinders Serbia’s accession to the EU, was pointed out by the President of the Belgrade Fund for Political Excellence.

“The European Union is the best choice for us, otherwise there is a risk of remaining on the periphery of the Balkans and Europe,” Liht added.

“Civil society should work on shaping foreign policy, but there are those who implement foreign policy and that are institutions,” said Jelica Minic, vice president of the European Movement in Serbia, pointing out the importance of strong intuitions and their dignity.